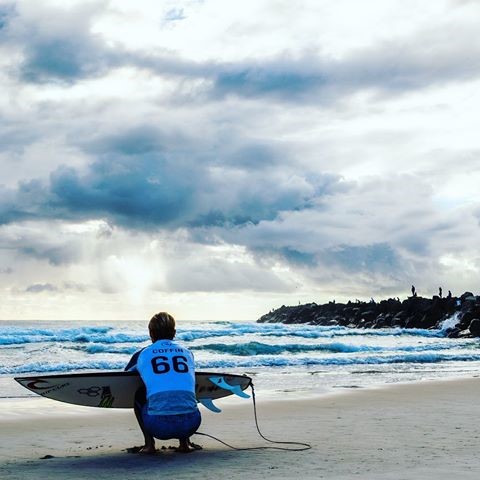 Getting to know Conner Coffin

Conner grew up here in Santa Barbara, CA ripping up the local breaks with his brother Parker.  Parker is also a pro surfer.  You could say surfing runs in their family.  Conner and his brother have a youtube channel showcasing good surf and their travels called Youngwisetails.  With Conner’s many interests he’s been able to stay pretty busy during quarantine.  He’s been playing music, recording music, surfing obviously, filming, gardening, fishing with one of his best friends, and I think most importantly for Conner hanging out with his girlfriend and family.

Conner Coffin is the most recent pro in a line of great surfers to come from this area.  His predecessors from the area include surfing icons like Dane Reynolds and Tom Curren.  Santa Barbara and Ventura Counties produce good surfers for a reason. This area boasts some of the best surf in the country when you consider all the great surf breaks from Jalama to Oxnard.  Conner has spent much of his childhood surfing every single one of these spots; he’s also traveled pretty extensively for good surf.  He’ll be the first to tell you it was a ton of fun but he’s worked hard to get where he’s at.  Nothing comes easy.

When you meet Conner what stands out is how engaging, friendly, and down to earth he is.  From what I’ve seen he’s like this with everyone which is somewhat remarkable and a true testament to his character.  When sitting near the top of any profession it would be easy to become arrogant, smug or even lazy; but that just isn’t Conner.  You can tell he was raised to work hard and treat others with respect; both of which have served him well in his climb to surfing stardom.

What’s the Draw to Watching this Sport?

There’s something awe inspiring about watching waves.  The draw for some is the beauty of a wave, others the sheer power and chaos and quite possibly the wipeouts; still others see a certain mystique of the unknown.  The fascination with a wave can vary depending on the lens you view it from.  Meaning the emotions stirred by that wave can change dramatically based on your perspective.  If you’re sitting on the beach watching the surf, it can seem peaceful and beautiful.  If you’re surfing and a perfect shoulder unfolds in front of you it’s thrilling.  When you find yourself in the impact zone on that same wave it can be terrifying.  The different emotions the same wave elicits literally depends on your angle, like so many things in life.  So the draw to watching surf is literally in the eye of the beholder.

What Separates Surfing from other Sports & Professions

There are different types of courage that go into each profession; some more evident than others.  It takes courage to be a surgeon knowing someone’s life is in your hands, or to step out onto a basketball court with millions watching, or to be Ricky Bobby driving with a cougar in the car.  With surfing at the higher levels it’s your own life that is at risk when entering mother nature’s wave pool.

If you’re a pro you’ve surfed some of the heaviest waves on the planet.  To put that in perspective one cubic meter of water weighs just over 1 ton.  The waves the pros surf at some of the bigger contests can land on them with the force of a dozen cars.   Big wave surfers are an entirely different breed.  The waves they surf may weigh as much as 100’s of cars.   Add the fact many of these larger surfing breaks form on a reef increasing the risk if you wipeout.  Speaking to Conner it sounds like the thrill of the ride and his passion for the sport simply outweigh some of the inherent dangers.

Every pro has a different path but most have some similarities in the contributing factors to their success.  Here are three that have assisted Conner to rise and be successful at every level.

Conner mentioned he surfed for 9 hours one day.  I’m pretty sure my arms would fall off  if I surfed that long.  It’s easy to say someone was just born with all that talent, but it’s likely they just plain out worked the rest of us.  An old coach of mine used to say “perfect practice makes perfect or close to it”, and Conner’s been practicing his passion in the ocean since he was very young.  At an early age he knew what he wanted to do for a career, set his sights and went to work.

There’s a reason 4 countries have won almost every surfing world title; they have large coastlines, with good surf, and a strong surf culture.  Those countries are Australia, The US, Hawaii (Hawaii is such a mecca of surf and is where the sport originated so in the surfing world they are their own country), and Brazil which has come on strong recently with 11 of the current 35 pros on the men’s tour.  Growing up in California Conner grew up in the right location; and second he’s had the ability to travel the world over in search of the top breaks to practice his art.

One of Conner’s favorite podcasts is Michael Gervay’s Finding Mastery podcast.  The podcast is about a mind right for life and among other things sports psychology.  An athlete’s performance is not all physical, the mind plays a huge role.  Even with all the physical tools in place if an athlete isn’t able to handle pressure or have their mind in a good focused place it can derail even the best athletes.

Advice for the Beginner from a Pro Surfer

Conner Coffin:  “Start on a bigger board so that you have lots of stability and it’s easier to catch waves”. From a surf school perspective this was music to our ears.  We get a lot of rental requests during the summer when the surf tends to be smaller.  Some clients really want to rent a shorter board because it looks cooler or they perceive it as better based on videos they’ve seen.  Now we can just state this is what the pro’s recommend for smaller surf; can’t argue with that.

Why is a Longboard Better to Learn On?

For anyone interested in learning the logic behind the theory, it’s simply the more you stand the better you’ll get.  Longboards are wider with more volume and thus more stable.  You will not only increase your wave count but the amount of time successfully standing on a wave.  In addition the waves that most people learn in are smaller for safety and you may need a longboard just to catch them.

What are your favorite things to do?
Conner Coffin:  Surfing, playing the guitar, cooking, reading, fishing, and listening to Michael Gervay’s Finding Mastery podcast.

Who or what got you into surfing?
Conner Coffin:  My dad and Uncle got me into surfing.  I remember a family trip to Hanalei Bay when I was 4 and my brother Parker was 2.  They pushed us both into our first waves there.

What’s the best experience you’ve had in the water?
Conner Coffin:  I’m pretty spoiled with so many good memories in the water.  Last year my dad came with me to the Tahiti contest at Teahupoo.  He was caddying for me and was sitting right where I got spit out on one of my best waves.  My dad thought I was dead till I popped out the back of the wave.  That was a pretty rad day.

What’s the worst experience you’ve had in the water?
Conner Coffin:  When I hit my knee on the bottom at Pipe and blew my left knee wide open.

If you could relive any day from your past what would it be?
Conner Coffin:  Any day I get to surf with my dad and brother and it’s good out.

As you progress in any sport the competition and stress to perform typically increases.  Many athletes perform best when they have fun and are able to stay loose; part of the mental portion of sports.  How have you been able to handle the stress and maintain your joy for the sport?
Conner Coffin:  When you enjoy what you’re doing it’s easier.  The stress ebbs and flows.  But keeping perspective helps.  Remembering to take a step back and remember you’re getting paid to do something you love.  Even when there’s challenging things.

Where do you think you get your work ethic from?
Conner Coffin:  From my parents.  Ever since I can remember my parents and grandparents have always been really hard workers.  They always said you could do anything you want but you have to work hard to make it happen.  I’ve always been inspired by watching them.

If you weren’t a pro surfer what do you think you’d be doing
Conner Coffin:  Doing construction with my dad.  I wanted to be a builder as a kid.

Something you’d love to learn in your life?
Conner Coffin:  How to build a house from start to finish.

How have you been staying busy during quarantine
Conner Coffin:  Tinkering on house projects that I seem to never finish because the surf has been good. Cooking a lot and gardening a bit.

What inspired you to get into gardening
Conner Coffin:  My grandma; she’s had a garden since I was young.  My mom gardens as well.  We’ve always had gardens growing up.  And I like growing and eating my own food and knowing where it comes from.

If you could have any meal right now what would you have
Conner Coffin:  Grandpas spaghetti’s and meatballs.

If you could invent something for the surfing industry what would it be?
Conner Coffin:  Something that actually repelled sharks.  They have the shark bands but I don’t know if they actually work.  If you could actually repel sharks that would be awesome.

Would you rather be a reverse merman or reverse centaur?
Conner Coffin:  Reverse merman. I’d be in the ocean at least then.  I could breathe underwater that would be cool.

Would you rather only be able to wear pants or shorts
Conner Coffin:  Shorts for sure!

Would you rather be able to stop time or fly
Conner Coffin:  Fly

Would you rather have only two long yellow front teeth like a beaver or no teeth at all?
Conner Coffin:  Maybe no teeth